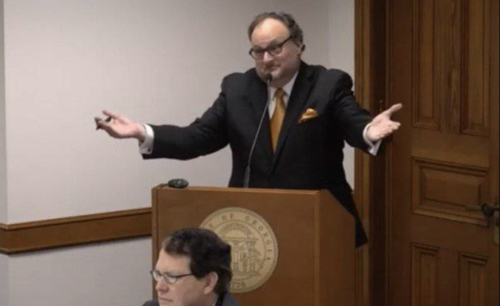 I am giving you Sir instead of Mr. Representative's treatment because the Congress of the United States of America for us, the Johsie Cruz campaign, is not recognized as such.

Both current Georgia Secretary of State Brad Rasperberger and State Governor Kemp have not accepted a proper audit of the absentee ballots. The monologue generated a few days ago by the voting organizer, Mr. Gabriel Sterling, gave a more than a pathetic explanation for many citizens of this state.

A few days ago, Mr. Jovan Hutton Pulitzer, one of the most important inventors in this country with more than 200 patents for inventions, before the Georgia State Legislature, offered to establish with 100% assertiveness the existence of counterfeit ballots. Printed or any of the 38 forms of electoral crimes reported to multiple individuals by the Georgia State Legislature.

You have stated that you, as a judge, have sent people to prison in cases of drugs and racketeering for lesser evidence than this.

But what is more dangerous? A drug dealer or the organizer of a massive violation of citizens' civil rights?

Yes, right now, it is irrelevant who won or not. The evidence presented and the testimonies about Civil Rights violations were as profound today as 100 years ago when the southern United States' Black population denied their fundamental right to choose and be elected.

This fight for Civil Rights had its brightest moment here, in Georgia, more than 55 years ago, when Martin Luther King Jr. and his real dreamers together, fought the good fight.

Martin Luther King's message for that Great American Dream is universal. That includes black people, brown Latinos, yellow Asians, red American Indians, WASP's, and mixed. We all aspire to the same to be judged not by the skin color but by the character's content.

The shreds of evidence have become a proven fact. The electoral fraud that you say "does not exist" has a massive impact on this society: It affects the civil rights of citizens, who, through voting, are placing their trust in a system that is supposed to be transparent and auditable. It affects citizens' rights who aspire to occupy public positions to their right to participate in fair elections. Still, above all, it affects the supposed "winners" who lose their legitimacy of origin, as is the case, by not being recognized or granted their supposed victory.

You bitterly complain that I did not grant you the triumph because I follow President Trump's orders. Nothing is further from reality. I do not concede the victory because doing so would be making me an accomplice of a crime, and that is very far from what my Father, a Baptist preacher, taught me as life principles.

I am intensely concerned about the threats to many people from your followers. Unfortunately, these threats became a sad truth this week, when someone attempted against the life of one of Mr. Pulitzer's investigators who received five bullets this week in a drive-by shooting. You, as a former member of the judiciary, have a moral obligation to stop the violence.

What better tribute to Martin Luther King Jr than to use a non-violent methodology to settle our political differences since the State of Georgia, both its courts and its elected officials, have been unable to do so?

I am making you an indecent proposal: Allow Mr. Jovan Hutton Pulitzer to audit the absentee ballots, based not on opinion but forensic evidence established through his methodology, with the presence of yours and my lawyers, and Let's say that if a substantial amount of forgeries detected on your part, let's say 10%  you resign for life not only to the office of Representative for the Fourth Congressional district of the State of Georgia but to any other elected office, calling immediately to a special election to replace you.

If a lower number is detected, you will receive from us the recognition to which you would be entitled, and in this way, we would close this matter that affects your honor and reputation.